I am sitting in my home office, in front of my Zoom screen, where I sit often these days.  But today is a special day.  I am attending an IPI virtual conference that is timely and of much importance to therapists and psychoanalysts.  The conference is called “Be Thoughtful and Act: Confronting Systemic Racism Inside and Outside our Minds” from October 9 – 11, 2020.  Kirkland Vaughans, Earl Hopper and Beverly Greene spoke yesterday about the disadvantaged education of Black children, the need to recognize the impact of the socio-political unconscious on self-perception and behavior, and the constant state of alert in which Black people live.  Now it is Saturday morning and I am listening to Dr. Greene again, and then to Dr. Wolfe, on the topic of the Intersectionality of Racism and Sexism. I want to share a few of their comments and personal reflections that meant the most to me. 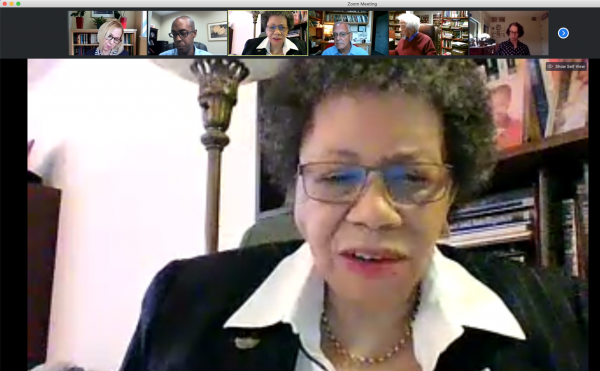 Dr. Beverly Greene, Professor of Psychology at St. John’s University, entered the screen and began with the history of feminism.  Architects of the women’s movement for equality were White women who were successful in getting the right to vote in 1920. But for Black women, suffrage was mainly theoretical until the Voting Act of 1965. In the second wave of feminism, the focus was on the woman’s right to work.  Dr. Greene pointed out that the pioneering White women ignored the history of Black women who had always been viewed as workers, regardless of their sex.  Some Black women have internalized racist sterotypes about themselves.  Many of them feel compelled to fit the image of the tireless, uncomplaining, subordinate worker who has to be strong, silent, and resilient.  In therapy, they may present with difficulty in claiming attention for themselves instead of always putting others’ needs first.  The late psychoanalyst Cheryl Thompson called this moral masochism.  But in human terms, what we see is that these Black women exhaust themselves from caring for others to the point of depletion, thinking that Black women are supposed to be strong and resilient, bringing in income and raising their children, constantly teaching them how to avoid trouble, and how to stay alive when extra-judicial lynchings, brutal brutality, and demoralization are rampant in insane society.

Dr. Greene told a story about herself and her mother. Dr. Greene grew up in Northern New Jersey of parents from the deep South at the time of American apartheid.  Like millions of other Black Americans, her parents became refugees from domestic terrorism and were part of the Great Northern migration of African Americans from the deep South into Northern and Midwestern cities. Beverly Greene and her family visited her mother’s home in Southern Georgia often.  On one trip, the train had a problem, and so they had to stop for repairs in Jacksonville, Florida.  At that time, the station was completely segregated from bathrooms to convenience stores, with signs saying “Niggers will not be served.  Whites only” right next to signs saying “Coke is 10 Cents.”  The 10-year-old Beverly was furious.  She said, “That sign says Coke is a dime and I have a dime, I’m going in there to buy a Coke.”  She got very loud, and her mom gently said, “If you go in there, those people will not serve us. You can’t go in there.”  Her mother agreed that it was not fair, but explained, “We can’t go in to those places, and don’t think of calling the police, because they will hurt us. We are not going to get hurt just to buy a Coke. For the sake of a coke it’s not worth it.”  Beverly knew she was trying to be disruptive.  Her childhood tantrum was not only that of a child who wanted a coke.  Her outrage was about inequity and even more about its acceptance.  She was most angry that everyone was walking around in that station as if it was perfectly normal.  Her mother understood and accepted that Beverly was angry and wanted to do something.  So, she told her child that it was alright to be angry, but taught her not to go up against a stacked deck. 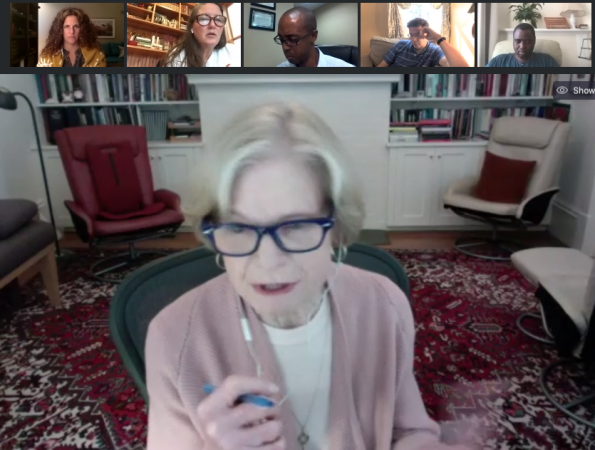 Dr. Harriet Wolfe, President-elect of the International Psychoanalytical Association, and former President of the American Psychoanalytic Association, came on to speaker view next.   She talked about her own history in order to model the importance of our looking at ourselves and recognizing racism and other forms of prejudice in ourselves before we can effectively guide others, whether socially or clinically. She described her youth as a child going to a private school and a women’s college. Her Whiteness did not strike her as a problem back then.  In those days, she was more aware of sexism as a problem for her.  Growing up in her family, the daughter had to be protected from behavior that her brother was allowed.  Moving from liberal arts education to medical studies, she experienced sexism when she lost the support of her father who did not approve of her choice of career, her politics, or her being outside his control.  As a medical student sexism was reflected in her having to take breaks in the nurses’ lounge not the doctors’ lounge. This meant she did not have access to informal medical teaching which male students gleaned from locker room conversations with their mentors.  Prior to starting medical school, she had worked with and become friendly with a childcare worker who was Black. She had trouble understanding why her friend never invited her to her home though it was possible for her friend to come to her home.  Dr. Wolfe realized that her colleague lived in a Black community where she could not welcome Dr. Wolfe.  It was a painful experience of racial boundaries. She continues to regret that race remained an unexplored problem between them. Her psychoanalytic training, where the teaching was still based on a one-person psychology with a focus on the internal structure of the patient’s mind, did not draw her attention to her Whiteness and what it meant.  Modern psychoanalysts now think of psychoanalysis occurring in a two-person field in which patient and therapist interact in a mutually influencing relationship.  They also think about transgenerational transmission of trauma and the influence of internal objects on behavior, perception of others, and relationships.  Thanks to psychoanalysis, Dr. Wolfe became able to understand her father’s point of view, stemming from his history, as well as the impact of a racist culture on her upbringing.  Now that the entire psychoanalytic community is dealing with the traumatic impact of systemic racism, Dr. Wolfe is viewing her Whiteness quite differently, as an inter-racial and political challenge to be contemplated in dialogue with diverse others.