Be Thoughtful and Act: Confronting Racism Inside and Outside of Our Minds
Reflections of the IPI Weekend Conference by Dra. Iraira Butcher

After finding much needed containment in the approximately biweekly town hall meetings with IPI and after the recent escalation in my frustration due to my inability to find a space to explore racism and discrimination in my country of residence, I was more than eager to participate in IPI’s weekend conference with the appropriate title of Be Thoughtful and Act: Confronting Racism Inside and Outside of Our Minds. I constructed a fantasy around my expectations for the conference thinking along the lines of Michael Jackson’s song, Heal the World. This fantasy held me through the latest rejection that I experienced when trying to explore these topics within an institution. In fact, the fantasy grew bigger and then frightening due to my ever-growing thoughts that I was going to be met by the persecutory resistance that has plagued the human race.

But I was pleasantly mistaken.

As I sat with an international community of analysts, psychotherapists, students, mothers, fathers, sisters, brothers, daughters, sons, whites, blacks, Hispanics and Asians, but most importantly, with human beings, to listen, to explore, to analyze, to learn and to understand, I quickly realized that part of the task that millions of human beings have set out to do, inside and outside of IPI and inside and outside of our minds, is to find, pull out and to deconstruct ideologies that have been so deeply rooted, in the DNA, in the unconscious, in the culture, in the psychic structures of humans of all backgrounds but also in the overall society that was built off of slavery, that as K.Vaughans’ said, gave birth to racism.

But it has proven to be a difficult task.

This brought to mind the fear of annihilation. As a black woman born and raised in Brooklyn, New York, I understand that, contrary from what some theorist may say, this particular fear of annihilation is something real and it continues to live strong, throughout an entire life, to include transgenerational , within afro-descendants and the other oppressed communities all over the world. But again, in contrast to what others may say, this fear of annihilation is not a fantasy, it is in fact a reality as it was eloquently exhibited by Dr. B. Greene’s reading of the thoughts written out by a black, COVID-19, frontline New York City Doctor during the weekend conference.

But it goes both ways.

The fear of annihilation is also experienced in the white community both as a fantasy as well as a reality. What I witnessed and experienced during this conference, within the white participants, either because of race or lighter skin color, is a collective shame and guilt not only for what was done in the past by them or their ancestors but because of their inability to deconstruct the ideologies that were imbedded in their unconscious, that was floating in their pre-conscious and that were ignored while in their conscious. In other words, the shame, guilt and resistance related to the difficulties in examining their own psychic functioning, in particular within members of the psychoanalytic community, the examination of their ego. It is important to note here that if therapists are unclear and untouched within themselves, it is more likely than not that there will be a parallel process within their patients.

But it is painful.

Our psychic structures are filled with defenses to counteract and to resist the pains that are associated with, in this case, racism. A few that were highlighted in the conference were denial, repression, projection, displacement, rationalization, reaction formation and intellectualization. Aside from defensive mechanisms, the conference brought forth a space to explore psychoanalytic theory and its strong attributes for understanding racism. Thoughts were discussed in abundance and emphasized such as K. Vaughans’ considerations on education and African Americans in the USA (school to prison pipeline), B. Greene’s and H. Wolfe’s personal and clinical contributions to intersectionality of racism and sexism, E. Hopper’s research and developments on social unconscious, M. Klein’s schizoid-paranoid and depressive positions, S. Freud’s views on mourning, D. Winnicott’s work on cultural experience and many others.

But, as expected, these discussions opened up many more unconscious doors.

The groups, both large and small, encouraged the participants to view racism from distinctive perspectives. This task stimulated me to examine my internal and external worlds thus allowing me to look more at the reality of the situation, which includes the fact that racism and discrimination is a painful topic with limited language to use as expression when describing it as it relates to oneself and to the other, internally and externally, individually and socially and particularly in the white communities. Semi-successful attempts were made to define or redefine terms such as microaggression, whiteness, white privilege and racism in and of itself, by including aspects such as greed, exploitation, narcissism, avoidance, loss, control, secrecy and many others.

But the reality is that there is no real plan to continue to address this topic in the future.

Interestingly enough, the topic of dreams and nightmares was introduced on the last day by C. Ashbach as a means to find ways to unlock the secrets that are kept inside of our unconscious by the resistance associated with addressing and confronting racism. There is no surprise that I had a dream and I was able to share it in my small group. The only thing that I could and can remember of the dream was that my mother was running for President. After exploring my own associations, that included the reality of the fact that we are in one of the most important elections in history, I determined that I saw partial objects in my mother such as my 14-year-old daughter, the resilience and perseverance that my mother had and that was passed down to me and that now I am passing down to my daughter. I was and am clear that, for one, my mother is deceased. Additionally, my mother could not run for President due to the fact that though she was a citizen of the USA, she was born in the Republic of Panama. I was and am clear that because of my career path, I could and can but do not want to run for President. I was and am clear that my daughter can in fact run for President, especially because of all of the opportunities that my husband and I, a black couple, are able to provide to her. It is important to note here that opportunities include psychoanalytic treatment, high quality education, a nuclear family that includes both parents and overall stability. What I didn’t know and realized after an interpretation by C. Ashbach was that I am very visible in the dream not by way of running for Presidency in its literal sense but by way of running the race to uplift the races as a leader. My question of where do we go from here still produces disorganized thoughts, however, one thing is extremely clear and that is that, through listening, as stated by B. Votaw, and partnerships like those produced by the community created in this weekend’s conference, will be the only way to move forward. 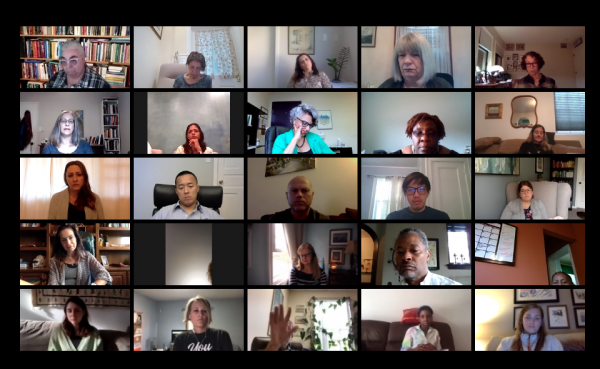